I’ve been off for a while due to some sticky family situation but I’m back just in time for S’mores Day. Talk about sticky situations!

As a kid, I’ve roasted marshmallows and I was familiar with Mallomars and Moonpies but I didn’t know what a s’more (or smore) was until I came to the U.S. decades ago. And although I love chocolate, marshmallows, and graham crackers, I have never eaten a truly authentic s’more like one made by a camp fire. Maybe because I don’t go camping. I’m not a very outdoorsy person.

So for the benefit of the rest of the world who hasn’t been introduced to this iconic American treat like I was, a s’more is comprised of a roasted marshmallow, a piece of chocolate (usually a Hershey bar), and sandwiched between two graham cracker squares. Originally known as a Graham Cracker Sandwich, it was popular with the Boy Scouts and Girl Scouts as far back as the 1920s. It was a 1927 article in Tramping and Trailing with the Girl Scouts that called the recipe “Some More”, maybe because you always wanted to have another. The name was later shortened to “s’more”.  The treat was probably an ingenious attempt to make something delicious from whatever they had one hand.

In order to create a s’more, some assemblage is required. The chocolate bar is broken in half  to make a square, put on one graham square, with the other graham on standby.  The trickiest part of this concoction is the roasted marshmallow. The marshmallow is skewered, preferably metal to make it melt faster.  Make sure the roasting implement is long enough to avoid burning your hand. I’ve done this over a gas flame and under the broiler. I even tried to make this in the microwave. The expanding marshmallow was amusing but I’m sure nothing beats the charred crispiness of marshmallow roasted over an open fire. The National Marshmallow Roasters Institute (it exists, I kid you not) has some helpful hints  to get just the perfect marshmallow. Top with remaining cracker and enjoy.  The heat of the marshmallow will soften and melt the chocolate and a slight squeeze will make the filling squishy and ooze deliciousness on your fingers.

If you need visuals, wikiHow has 3 different ways to make a s’more plus variations of s’mores. You can change the type of crackers or use cookies, and alternative fillings can be used, too. But I am a traditionalist – it has to have the marshmallow. For health reasons, the U. S. Department of Agriculture has suggested substituting low-fat vanilla yogurt and strawberries for the chocolate and marshmallow but then that wouldn’t be a s’more, right? That’s not quite patriotic!

Americans love s’mores so much that it has morphed into so many other creations such as s’more pops, s’mores truffles, s’mores milkshake, s’mores bars, s’mores cake, s’mores popcorn – you get the picture. We LOVE S’mores! The largest s’more ever made was in Deer Run Camping Resort in Gardners, Pennsylvania on May 31, 2014. It was made by 104 volunteers and weighed in at 267 lbs (121.11 kg), garnering a Guinness World Record. Look at that guy eyeing that monster. 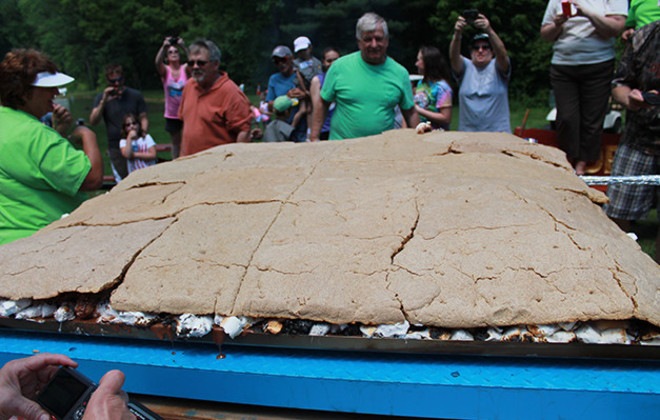 You don’t need to make a giant to enjoy this ooey, goooey treat.  Tip: Love marshmallows? Grab a bag of those Jumbo Mallows (Kraft) or Giant Roasters (Campfire). Neat freak? Try Kraft’s Stacker Mallows. They’re square, thin, and fits exactly on a graham cracker. But in any case, keep the napkins ready.

Sharing Information About Writing and Illustrating for Children

Master of Library and Information Science

Cooking with a Wallflower
Cooking Without Limits

Recipe in a Bottle

Connecting to Friends, Old and New, Through Recipes, Gardens, and Dinner Parties

Where art, delicious food, and world travel are incorporated into the home with a feminine twist!

Recipes of your dreams!

sharing my love of all things sweet

Engineer by profession, Baker by passion

A YYJ Foodie's Show and Tell

Mr. Chef and Mrs. Cook is a food blog of a couple who love baking and cooking.